april 07, 2016
Hello, beautiful people !
I was at the The 1975 concert this Monday and it was so good! I was there with one of my besties (her Instagram) and we have gone to so many concerts together in the past so it was just so nice and cosy !

We arrived an hour before the doors would open. And as excepted there was a lot of people but luckily for us a lot also arrived after us ;)
When we got inside we started out by standing in the crowd but we then decided to sit on the side balcony (see the picture) because we just wanted to enjoy the show and just sit back + non of us had been listening to the new album on repeat soooo we just wanted to listen to some good music together.
The warm up band was The Japanese house and they were okay but not for my taste. The sound was not so good while they were playing and I don’t know if our seating position compared to the position of the speakers were bad or if the sound all round was bad.

Sadly, we also saw how many girls that faints during a concert – you don’t see this as much when you are in the crowd. And remember if you are standing at the front and get dragged out you are 99% of the time not let back in!! So drink a LOT of water so you don’t dehydrate and loses your amazing standing place.

And now to what we all have been waiting for The 1975! And they were so good! They had the crowd with them from the beginning and lets just talk about how amazing Matthew Healy is to connect with the crowd. Like Matthew Healy is a legend!
He just said some amazing things like he started the show out with apologizing about them being an English band and that means that the whole show would be in English and then he said and I quote: “Don’t let that be a sign of our arrogance but an impression of your intelligence” and I don’t even care if he says that at every show that is in a country that doesn’t have English as their primary language. It is just sooo fucking beautiful words?!

I also love the fact that he told everyone to just be In the now and not have their phone in his face for just one song and it was so nice for once just being able to see people instead of phones. But I just got so pissed at the 5 people who still had their phones up like wtf?

The last ting we need to talk about is Matthew Healy’s outfit. It was on point! He wore high healed black booties, loungewear pants of cause also black and a black cardigan (with nothing underneath) and half of his hair up in a bun like he was beautiful!

All in all it was just a totally amazing night and it ended with fries from McD so yes love from here. 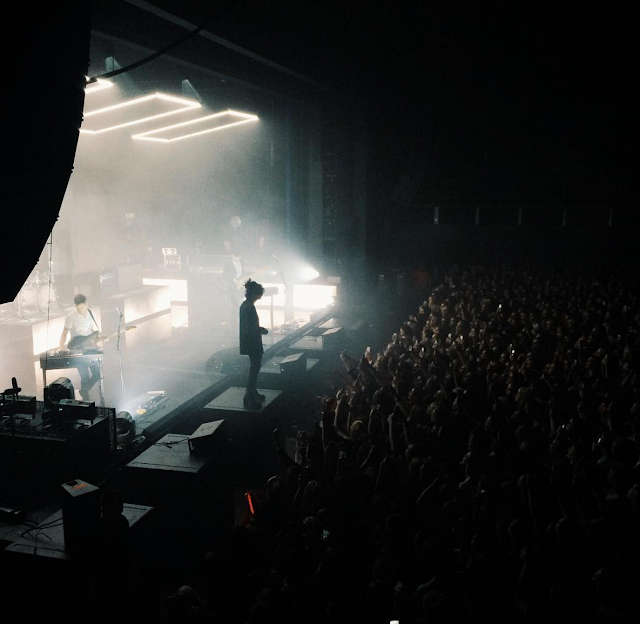 Have you ever seen the band live??
concerts